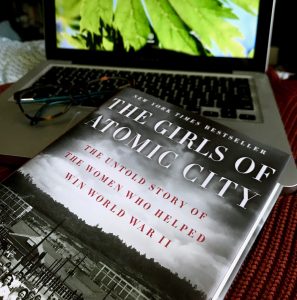 If you’re interested in a book that leans more towards historical non-fiction with some light science sprinkled throughout, then this is a great book to read. In just the introduction of The Girls of the Atomic City: The Untold Story of the Women Who Helped Win World War II, Denise Kiernan does an excellent job of painting a vivid picture of this period of the 1940s in a “town” that most of the country did not know even existed. Very quickly, we are placed into the Appalachian Mountains of Tennessee, where radioactive material was enriched for the atomic bombs. Oak Ridge, Tennessee may have been isolated from the rest of the country and shrouded in secrecy, but like any town packed with every type of person, it faced moral and social problems just like the rest of the country in the 1940s. Problems like segregation, sexism among the workforce, and the psychological effects of living in an environment where everything you do is a secret. Through the lens of the women of Oak Ridge and the atomic bomb, Kiernan tells a story that many did not know or fully understand for decades after the war ended, and yet everything in this book resonates with the problems and emotions that we experience today.

The scientific side of the atomic bomb story begins with two women; a fact that I was surprised to learn since women in science are rarely mentioned, let alone women in science in the 1930s-40s. Back in 1934, a geochemist called Ida Noddack proposed an idea that many in her field of study ignored or thought was preposterous. But four years later, in 1938, the physicist Lise Meitner was trying to make sense of her colleagues’ data, and in doing so, was able to calculate and therefore explain the idea Ida Noddack had proposed. This principle, nuclear fission, ended up being the power source for the atomic bomb because when the nucleus of an atom is split into pieces, it releases tremendous amounts of energy. While these two women’s ideas were instrumental in the eventual conceptualization of the atomic bombs, there were also countless other women who worked at Oak Ridge, and at other sites associated with the Manhattan Project, who helped bring this concept to fruition. Women were integral to running the machines that enriched the material that fueled the bombs, and they were a part of the research teams that were trying to understand how to set off a chain reaction of fission events. Prior to reading this book, I had no idea that women were so involved with these discoveries or that they played a direct role in studying and weaponizing fission. So often women in science are pushed aside or their roles are diminished. This was unfortunately, perfectly demonstrated when shortly after World War II ended, the Nobel ceremony for Chemistry was held for the discovery of fission. Lise did not win the award. Her colleague did, and he downplayed her role when he gave interviews. The systemic problem science has in this regard, can only hinder future generations of scientists who are searching for role models to emulate.

When thinking about Oak Ridge and the atomic bombs in general, the old adage, as cliched as it is, “hindsight is 20/20” often came up. It’s hard sometimes to read a book about a period in time so vastly different from our own and not pass judgement on decisions made, beliefs that were held, etc. How can we ignore the fact that an African American man who was admitted to the Oak Ridge hospital following a car accident didn’t have his bones immediately set so that they could inject him with radioactive material and more easily collect samples from him (15 teeth, blood, and tissue) to test for the effects of radiation? Or how can you learn that a wave of strong radiation traveled hundreds of miles after the testing of a bomb prototype in New Mexico and citizens were never notified or warned of the effects of exposure, and still be completely okay with the idea of this kind of power existing? It ended up taking the entirety of the time that the US was involved in World War II to generate enough material to power the first atomic bomb; the first prototype was tested July 16, 1945, two months after VE Day. That combined with the mind-boggling cost of simply building and running the plants at Oak Ridge (over $1 billion), and what is probably similar costs for the other locations of the Manhattan Project, it begs the question “Was it worth it?” The residents of Oak Ridge didn’t become aware of what they had been contributing to the war effort until the bombs were dropped on Japan. And those who fully understood the implications of dropping the bombs, even the main scientist at Los Alamos Robert Oppenheimer, had conflicting ideas about whether they were in the right or the wrong in this situation. Meanwhile, many people still believed that dropping those two bombs was completely necessary to end the war in the Pacific arena.

The interesting, and perhaps frustrating, thing about history is that we will never know how it might have ended or gone differently. The only thing we do know is the repercussions of those decisions. How much longer would it have taken for nuclear fission to become weaponized without the driving force of war behind the discoveries and experimentation? Would the Cold War have been so imbued with the of fear of nuclear destruction if we hadn’t made the decision to so prominently display the full power of the atomic bomb? But for every negative consequence of this discovery, there are positive contributions to the world as well. Because of the discovery of fission and radioactive isotopes, the medical world began to use isotopes for imaging and further research was done to understand the effects of ionizing radiation. That all being said, this book will not only shed light on a time and place that very few of us know about, but it will also cause you to think about the bigger picture of the effects that science can have on the world.