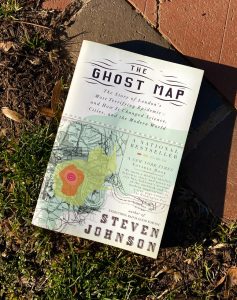 If you’re the type of person who is into true crime documentaries or procedural/detective TV shows, then The Ghost Map by Steven Johnson is the book for you. This book is part history lesson and part step-by-step breakdown and tracking of the cholera epidemic that hit London in 1854, which killed about 700 people within a 250-foot radius in less than 2 weeks. Johnson doesn’t begin the book by dropping us right into the onset of the outbreak. Rather, he starts by vividly describing all of the jobs and people that were required to maintain Victorian London’s version of a waste management/recycling system. You begin to get a sense of the precarious balance that was present during this time between the booming population growth and the resulting waste removal problem. As with any economy, when there is a need for a service, especially when it’s an undesirable one, the cost of that service goes up and people decide to find a way to get around the need for it. In the case of London, their solution to the ever-increasing accumulation and removal of human waste was to just dump it into the river. Most of us as modern readers can easily predict how this would not end well, but as Johnson details in this book, there were many beliefs in place during the 1850s that prevented this realization and inevitably led to the cholera outbreak.

London, while a modern city by Victorian standards, was still a place full of prejudice and bias. Namely, when it came to diseases and their spread, there was a huge bias against poorer neighborhoods. This bias against the lower class was best demonstrated by the purposely designed physical separation of the poorer neighborhood at the center of the 1854 outbreak and Regent Street with its more well-off residents.Despite the two neighborhoods backing up to and running parallel to each other. This separation was a double-edged sword, it prevented the spread beyond the initial outbreak zone and thus prevented the outbreak from being worse than it was, but in doing so it provided fodder for those who argued that the outbreak was only targeting those who were “less clean” or poorer because there was something morally deficient about them. Another factor at play during this time was the overwhelming belief that miasma, or smell, caused disease. As you can imagine with a whole city collecting waste in cesspools, dumping those contents into the streets/sewers, which all then emptied into the Thames River, there was plenty of noxious fumes to go around. These prevailing attitudes and beliefs made it very difficult for anyone, no matter how strong the evidence, to argue that cholera affected people regardless of social standing or how “clean”/smell-free a place seemed.

Despite the ingrained ideas of the majority of people living in London then, there was one person who was in the perfect position to solve the mystery of the cholera epidemic, the physician John Snow. In John Snow, we again see how much synchronicity plays a role in scientific discovery. This physician was someone who had a keen scientific mind that was prone to continually hounding a problem until he completely solved it. Perhaps most importantly, he was not inclined to believe the miasma theory because he had spent years studying how temperature affected gases like ether, and therefore knew the properties and behaviors of clouds of gases. Due to a previous cholera outbreak in the 1840s, Snow already had his suspicions that cholera was a waterborne-illness. When the 1854 outbreak happened in his own neighborhood, he used a combination of personal interviews with non-infected individuals and death statistics collected by a doctor who worked for the government to map the affected houses and their water source. Still, there were gaps in the record because so many residents of the neighborhood had fled as soon as the outbreak happened. Snow then teamed up with a reverend for the neighborhood who had the personal connections to write to those that had fled and fill in the personal details that were otherwise missing from Snow’s map. From all of this, they were able to determine that almost all of the people who contracted cholera drank water from one pump in the neighborhood, and going so far as to find “patient zero” and the exact source of the pump contamination. Unfortunately, despite all of the strong, fact-based evidence that Snow and the reverend put forward to the Board of Health, those in power still clung to the miasma theory even while they conceded that the pump handle should be removed.

Eventually, London did build a proper sewer system, albeit motivated by the miasma theory, that didn’t immediately contaminate the main source of water (the Thames). But it still took another 10-15 years for people to believe the evidence for the waterborne-theory, at which point John Snow had died and could not witness his impact. Still, his theory and his determination to soundly prove his theory has a lasting impact on the world today. Once the sewer system was fully in place, London never had another outbreak and other cities followed their example. People began to ever-so-slowly relinquish the certainty that they would die of some horrible disease spreading through their cities. As a result, we’ve built up our standards for safety and we more strongly react to and fear outbreaks of any nature. It was happenstance that I decided to read this book before the current coronavirus outbreak started, but I still think that many of the messages and lessons in this book are relevant today. There will always be people with wild theories, people going back-and-forth with doctors about how to treat infected individuals, and people scared to be next. But there will also always be the people who are willing to wade into all of the turmoil and look at the problem from every angle and get at its root cause in the hopes that they can save lives.