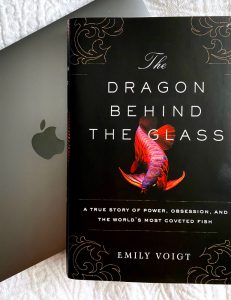 At first glance, The Dragon Behind the Glass by Emily Voigt seems like it will be a true crime style book about a highly coveted, ornamental trophy fish. The Asian arowana, or the “dragon fish”, is a modern phenomenon in the world of aquarium enthusiasts, prized for its rarity and dazzling colors (red, gold, and green). Baby Asian arowana sell for a few thousand dollars, while prime adult specimens can sell for upwards of $150,000. On the surface, Voigt presents the history and current events surrounding this fish, focusing on those that depict the obsession arowana lovers as well as the miasma of half-truths and danger that surrounds the Asian arowana. Stories of fish farmers or sellers being robbed at gunpoint multiple times or of judges at expos refusing to be responsible for arowana judging for fear of their safety/life are the norm. But, woven throughout these fantastical tales is an important discussion about our effect on the environment and animals — how much are we to blame and what is the best course of action to correct these wrong-doings?

First described in the mid-1800s, the Asian arowana remained rather anonymous to the world until the 1970s and 80s. Prior to this, they were only seen as food sources to those who lived around their natural habitats. However, in 1975, the Asian arowana was placed on Appendix I of the Convention on International Trade in Endangered Species of Wild Fauna and Flora (CITES); essentially a list of the “rarest of the rare” animals and plants that are banned from international trade. Around this time, aquarium enthusiasts were becoming aware of the Super Red variety hidden in the depths of Borneo’s interior. From this point onwards, a combination of the novelty and depth of the red coloring, various cultural associations with the color and the fish in general, and the clout that came from owning an endangered fish drove the demand for the Asian arowana through the roof. Smugglers traveled to the various remote natural habitats, severely depleting the populations, and the illegal exotic market boomed. In an effort to lower the demand and the effect on natural populations, CITES eventually allowed the breeding and trade of farm-raised arowana from a select group of approved distributors, if they could prove their fish were not wild-caught. Yet populations still remain decimated to the point where years pass between sightings by locals, while the Asian arowana continues to be farm-raised by the hundreds of thousands.

The complex past of the Asian arowana makes us consider both the negative and positive side-effects of placing animals, and plants, on protected species lists. On the one hand, it’s a bold and clear claim that these organisms are important and at risk of being lost forever. Conversely, there is something to be said for this then causing thrill-seekers or collectors of rare items/specimens to take notice and try to acquire it at any cost. It’s the age-old adage of “you always want what you can’t have.” While farm-raising endangered fish means that theoretically they’re no longer being poached from their habitats, it also removes any incentive to protect the original habitats and instead further increases demand for the fish. Many scientists that Voigt spoke to, even the one who originally proposed for the Asian arowana to be on the original CITES list, argue that it is important to protect species, but perhaps it’s more important to protect the environment from which they came. A farm-raised animal is a domesticated animal, and despite our best intentions to save them by raising them, we are interfering with their instincts and making them less capable of surviving in the wild upon release.

Perhaps the biggest plot twist that Voigt reveals in this book is that the Asian arowana was never meant to be on that Appendix I list in 1975. An early draft said that the Asian arowana should be deleted due to insufficient evidence to support its inclusion. We will never know how much demand there would have been had the Asian arowana never been included, we can only take what happened to this fish as a cautionary tale for future conservation attempts. Hopefully, we can avoid another case in which we mass-produce an endangered species without attempting to maintain its natural habitats and populations.