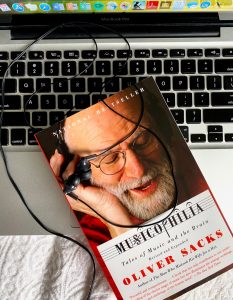 If you’re someone who loves music, is a musician, and/or just really likes to learn about the brain, then I highly recommend that you read Musicophilia by Oliver Sacks. I originally chose this book because I love music to the point where I probably spend about 75% of my day with music playing in the background, and I wanted to learn more about how the brain processes music. That being said, I learned far more than I expected, and I was consistently blown away by how complex the brain is and the idiosyncratic ways it manages to function in spite of damage or deterioration. For a scientific field that didn’t really take hold until the 1980s, the amount of information that the neuroscience of music has uncovered is already impressive. Oliver Sacks is probably one of the more well-known science writers, and for good reason. He continually brings a poetic writing style to his books that grabs the imagination of the reader. Once he reels you in with that, he keeps your attention with how he writes about his patients and other medical anecdotes; always blending traditional observation with touches of personal experiences and empathy.

As with anything to do with the brain, music and the processing of music is equally complex. And perhaps the “easiest” way to begin to understand music and the brain, is to look at what happens when that processing goes wrong or is more active than usual. Sacks summarizes the results of countless studies that looked at how the sizes of different brain regions associated with music and speech processing differ between musicians and non-musicians. So far, they’ve found that in musicians, especially those who began at an early age and practiced often and seriously, these regions are noticeably larger suggesting that the brain was restructured to some extent. Also supporting this, scientists have found that in people blinded early in life, there is extensive reorganization of the brain – the large visual cortex became reallocated to other processes like those involved in hearing and touch. Throughout the book, Sacks also mentions the careful balance between inhibition and excitation of the left and right sides of the brain and how when this balance is skewed, we see “pathologies” emerge. Phenomena like musical hallucinations (earworms on steroids), more common in aging people or those with hearing loss, and savant-like abilities following left hemisphere damage demonstrate this precarious balance. The brain is either trying to compensate for a lack of sensory input or it’s no longer experiencing the inhibition that the left temporal lobe normally exerts, and then the right hemisphere becomes much more active than normal.

What we know about how the brain processes music has also come from observing the effects of music on people with other processing disorders. Sacks talks about cases where autistic kids and aphasic individuals, specifically those caused by either left frontal or temporal lobe damage, were finally able to process speech and/or communicate for the first time. In these cases, music is somehow able to circumvent the language and auditory processing problems in the brain in these individuals; words are now understandable so long as they’re in song and communication happens but only via singing. Not only can music help overcome speech and language processing impediments, but it’s also been found to help those with movement or mental disorders like Tourette’s, bipolar disorder, or schizophrenia. In these cases of movement disorders, the rhythm in music and our brains’ inherent nature to extract/follow rhythms in our environment helps to reestablish a more ‘regular’ pattern of movement. This book also mentioned cases where people suffering with mental disorders were able to rein in their mania, depression, or schizophrenic events when playing music. Playing music was more of a band-aid rather than a long-lasting cure, but it’s still fascinating that it was capable of over-riding strong signaling and impulses in the brain.

Overall, while Musicophilia may use scientific terms that not everyone may know, it doesn’t detract from the impact of the information and the overarching message that Oliver Sacks provides – music is a distinctly human pursuit and creation. This book is riddled with examples of the power that music has over our brains and how it connects us. The patterns in our languages drive the structure of the music we create, almost like a “gravitational pull” as Sacks says. Experiencing music live creates a subtle subconscious connection between a group of people, even if only for a short while. The choice of music that becomes an earworm at any given time can sometimes be related to what’s going on in our lives, almost like a subconscious message. There’s still so much more we have to understand about how our brains process music, like exactly how and why these processes go “wrong” or “right”, but we will always be able to simply enjoy its existence while we create, play, or listen to music.