Today I learned: whaling in the 20th century indirectly stressed out many different species of whales. A group of scientists looked at the earplugs of three different types of baleen whales: fin, humpback, and blue. A whale earplug is a collection of ear wax that has alternating lines that tell the age of a whale (like tree rings do) and store both endogenous (i.e. hormones) or exogenous (i.e. pollutants) chemicals. Because of this, they could measure the amount of cortisol, a stress hormone, in each whale during many different years. They found that when whaling numbers peaked, there was also a peak in the average cortisol levels. Interestingly, when whaling decreased during World War II, they still saw slightly higher cortisol levels, which suggests that wartime noises (i.e. submarines, bombing/explosions, planes, etc.) also increased the stress in the whales. The sharp drop in cortisol levels in the 1970s was connected to the start of the Marine Mammal Protection Act that put a moratorium on whaling. However, cortisol levels have been slowing increasing since then, indicating that other stressors are present (i.e. increased sea temperatures, over-fishing, and noise).

The graph shows that from 1900-2000, when whaling numbers (blue) increased, there was also an increase in cortisol levels (black). Highlighted in grey is a period corresponding to WWII where the whaling numbers were low, but cortisol was still high. Also shown is a red line to indicate when the Marine Mammal Protection Act went into effect in 1972 to emphasize the sharp drop in cortisol levels that followed. 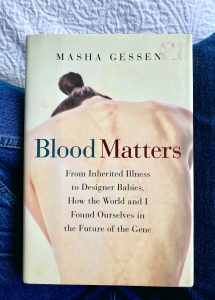 Blood Matters by Masha Gessen is what I imagine you would get if you were to immerse yourself in the inner monologue of a fact-obsessed individual’s decision-making process. The book opens with Gessen learning their mother has died of breast cancer, followed by a jump in time to Gessen getting a positive BRCA1 mutation test result. These two events set the tone for the book in which Gessen examines through the past and present lens how genetics, and our knowledge of our own genetics, has shaped how we view ourselves, the world, and our connections to each other. In doing so, Gessen lends a perspective not often seen in journalistic or scientific writing — the Jewish one. As readers, we get to learn about scientific concepts in the frame of Jewish history and anecdotes, as well as how these concepts and the ideologies born from them have reverberated through history. For me, Gessen’s need to know all the facts before making a life-changing medical decision was extremely relatable, and I think many others will find it easy to empathize with Gessen’s experience(s).