Today I learned: a group of scientists figured out that distinct brain responses are involved in mediating our response to pain (noxious stimulus) via motor (movement), perceptual (feeling), and autonomic (unconscious body reactions like signal conducting) responses. To figure out this stimulus-brain-outcome relationship they measured motor (reaction times), perceptual (pain rating 0-100), autonomic (skin conductance), and brain (brain waves) responses to a series of random laser pulses (varied in both the time between pulses and the intensity of the pulses). As expected, more intense laser pulses caused the participants to have a faster reaction time, a higher pain rating, and stronger skin conductance measurements. But what was really interesting about this study was that they found that of the four brain waves they measured, not all were responsible for every response. Rather, each brain wave was involved in mediating either only one or two of the responses to the laser pulses. And contrary to what most people would expect, the earliest brain waves were not involved in the perception response, which means that you don’t need to consciously perceive the painful stimulus in order to have a motor or autonomic response. 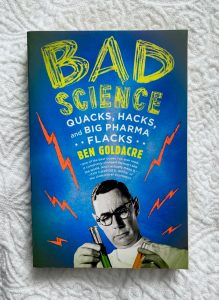 Ben Goldacre’s Bad Science is the perfect book if you’re looking for something written in a sarcastic and blunt voice, while still teaching you about how mainstream media distorts scientific facts. While this book may be most useful for those not as deeply entrenched in the science world, as a scientist I still learned a lot about the history behind media presentation of science and evidence-based medicine. From the opening, Goldacre sets up the structure of his book; he clearly outlines the anecdotes he will mention and how they all build upon each other to explain the cultural and psychological influences that drive the pervasive misrepresentation of good science and the peddling of pseudoscience. He also sets the foundation for how he plans to teach readers how to conduct basic scientific reasoning/thinking on their own so they can pass judgment confidently on pseudoscience in the media. What seems like a monumental task has been neatly broken down into manageable/approachable sections. END_OF_DOCUMENT_TOKEN_TO_BE_REPLACED