Today I learned: scientists figured out the oxygen levels in the waters off of Central America from 40,000 years ago. Before this study, people had thought that during the last glacial period (~110,000-15,000 years ago), oxygen levels in the oceans were higher because cold water can hold onto oxygen better. But this group was able to use a type of fossilized plankton that only takes up a type of nutrient in oxygen-rich conditions to determine that the deeper waters of the eastern Pacific Ocean were actually oxygen-depleted during this time. Typically, oxygen levels in oceans increase as you go deeper, but Hoogakker et al. found that there was no increase from shallow to deeper waters. Because the Pacific Ocean is the biggest sink (or storer) of carbon, holding about 50% of the total oceanic amount, this group suggested that the Pacific Ocean played an important role in the amount of carbon dioxide in the atmosphere during the glacial period and the transition period that followed.

Today I learned: two years ago scientists finally figured out the secret to dandelion flight. A group from the UK found a new type of air movement (an air bubble/vortex that stays right above each seed, but doesn’t interact with it) that keeps dandelion seeds afloat. Each seed basically acts like a disk with a lot of holes in it that allows air to flow through. They also showed that the seeds can stay afloat so well and travel so far because of the structure of the seeds. Dandelion seeds are lightweight and plumed, which means that they can create air drag while still providing stability. So the next time you blow on a dandelion puff, you can think of each seed as a little parachute being carried by the wind. 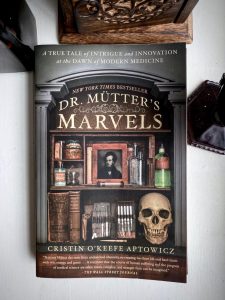 Admittedly, I picked up Dr. Mütter’s Marvels: A True Tale of Intrigue and Innovation at the Dawn of Modern Medicine by Cristin O’Keefe Aptowicz a few years ago because of the cover. I thought this book was going to be about a doctor in the 1800s and the crazy cases he saw and the surgeries he performed on people with serious deformities. But what I got instead was a book that was dedicated to showcasing Dr. Thomas Dent Mütter’s revolutionary thinking and beliefs when it came to patient care and medical student teaching. In the mid-1800s, Philadelphia may have been a rapidly-growing, modern city, but it was also an incredibly dangerous place. During this time, asthma, a broken bone, or a rotten tooth could just as easily kill you as yellow fever, cholera, or smallpox. Amidst all of this, Philadelphia was also the city with one of the oldest and most renowned medical schools in the country – the University of Pennsylvania. However, compared to what we expect of medical school graduates these days, very little was required of students in those days. Students often graduated with as little as a year or two of schooling, and essentially no practical, hands-on experience with patients. It should come as no surprise that patients were treated simply as cases, with little attachment or care shown to them by doctors. It was not a good time to fall ill. END_OF_DOCUMENT_TOKEN_TO_BE_REPLACED